Enough small talk...what do you do then?

When do you know when it’s time to leave the pub and go home. Straight home. Don’t even stop at robots or look behind you. When the guy standing next to you at the bar, who has the coldest eyes and harshest look turns to you and says, “I’m a murderer. And I take it very seriously. I don't F*ck around”.

My friend walks up to me, hands me my bag, while I am wrapping some stranger in meters of red material to make him look like a giant bow for his boyfriend’s birthday, and she says “We’re leaving”.

She explains to me what Psycho had just said to her. I’d already made an earlier duck from him cause he was angry with me for not complimenting the non-existent sketches in his drawing book that he was toting about.

We dragged Third Friend away from Psycho, who was now quietly reprimanding her for breaking the strap of his bag. And we made a noisy exit.

Any & all types can be found in Melville, I guess! Even at 1am on a Friday morning after a fancy charity event of the Long Long Table.

Thanks Starfish Foundation! About 1500 patrons along 7th Avenue. Our table alone paid up R6000.00, with 50% going to the Foundation.

We’ll see you at the next one!! ...dressed up much better this time than just a few stars stuck to my face. Excellent vibe, decent food over several hours, pretty pretty lights across the entire length of the street, and all behaviour remaining civilized. Well, until someone walked past me with a vase of roses and his waiter passed me carrying 10 metres of red ribbon…

I think I did quite a good job on the bow though…. 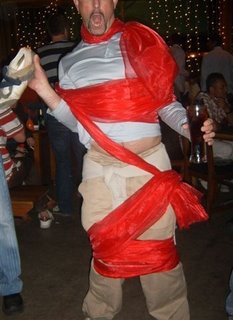 Posted by Champagne Heathen at 09:43

Shit, all pyschos aside, I'm so sorry to have missed it. But there was no way I could keep my eyes open yesterday. I went to the one last year and had a blast. And I LOVE the bow Champers! :)

Ah thanks! I am quite the talented designer n'est pas?! I'll see you at the next one & we'll dress up crazy like!

At least he wasn't one of those frivolous murderers who don't take their work seriously. You never know where you are with them.

I LIVE in Melville and didn't realise the Long Table thing was happening. Wonder what planet I'm on.
I would have called security on that guys ass, just to see if he WAS actually joking.

Kyk - ha ha! Definitely. He at least had the whole disturbing stare, uncomfortable aura. You have to hate those guys that smile so sweetly, become like your best friend, and then stab you in the back!

Jam - it was in Unplugged so I don't think security was in a km of us. It also was an intelligent hour to go home anyway!
You gotta be a person who knows people...like I am...so luckily you now know me!

What a crack head, would have kicked in the bollocks, sounds like you had a good time though... nice bow... all red and dangerous!

You should just see ME in that ribbony stuff. I look like...like...hold on, let me recheck....like I have 10 metres of material randomly dumped on and about me. But I had a rose too! sigh. How to stay discreet when out!

Yes, but party discreetly!!...with 10 metres of bright red material piled on top of me in the middle of a pub ;)

champers: "You have to hate those guys that smile so sweetly, become like your best friend, and then stab you in the back!" a tad bit ironic no? ha ha!

i think you might just have a job in the fashion industry!

Yes, irony intended! I was on the ball that day. And well, why thank you. You're welcome to call when you need your wedding dress designed!!