My country is broken.

My country is broken.

And not one of us knows how to patch it up. We’ll razzle dazzle you with answers, but scratch enough, and the sheen is gone too soon.

A girl came out of the interview. She smiled the biggest smile towards me. And went to join her girlfriends playing barefoot netball on a stoney playground. My colleague followed after her, shattered.

“That girl. What that girl goes through. Beaten by her family everyday when they’ve been drinking”.

My colleague had conducted eight such interviews that day.

She’s training our handful of “guys” to soon be doing this on their own. They’ll have to interview over five thousand children by our year’s end.

I’m missing two of my guys. They were too busy to host my visit. They’ve had to counsel a family where the teenage daughter stabbed and killed her father the night before.

We didn’t train these guys enough for this. They aren’t equipped to take on the world’s problems. But each educator who meets with them and our project thinks, “Thankgod you’ve arrived, You need to take this burden off me, I can’t keep this up for much longer”.

It is the poorest and most under-resourced onto whom we are offloading our country’s problems.

Because they cannot fight back. Because their desperation is too deep and their voices are unheard. And because we can choose to ignore them.

We “pay” them a stipend. Give them a t-shirt. Maybe give them a few hours of lessons of how to Give Care.

First, we asked the caregivers to nurse and counsel our country’s sick while they died of AIDS. The government caught on and Mbeki promoted the giving of care in his speeches.

Then we asked these caregivers to not stop there! To take on the children of the dead and counsel them, clothe these orphans, feed these vulnerable, guide them through life lessons, take them to get the right documents from inept Home Affairs, take them after they’d been raped to be examined at an unresponsive local clinic, take them to the cop shop to report abuse of their grants or their bodies that would not be followed up on.

Finally, we told these caregivers, we’d solve their problems too, we’d respect these caregivers themselves. We’d care for them. We’d give them soap here. Another t-shirt there. We raise their salaries by R100 a month… Transport included. And how we skilled them up? …. We taught them how to talk to each other to lift your weight from your shoulders.

Here’s a half day’s training [ACCREDITED!] in how to talk to your friend. All the best. Byyyyeeee!

Gone to England everyone.

Our state structures got burnt out long ago. On no resources. Too many cases. A laughable salary. Not enough skills for this.

And so we pass the burden on. Rather than rebuild and reinforce the smouldering social state structures, we pass the lack of answers and crushing pain to the women and men who cannot refuse it. And whose complaints can't go far enough up the line to be noticed. But the stipend means income. And the day’s work means fighting one's community’s pain head on.

And so the caregivers become a force. Our force. And we show you how we’re saving our country. How we put a bandaid over the shattered system. 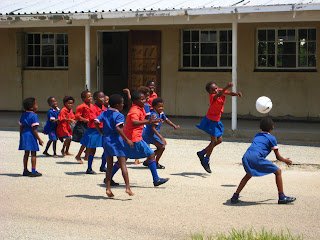 And I watch the girls playing netball. Occasionally stopping to pose for a photo moment. Having the type of fun you can only enjoy being audience to.

And I consider, from experience and from my field reports, how many have been mis-touched by an uncle, have arrived at school with drying stains of semen down her legs, ate one meal a day for the past eternity, spend every school day visibly barefoot, gone home to nurse a grandmother with a stroke and feed a brother too young to be orphaned, who still get homework done for tomorrow’s overcrowded lessons.

These girls who have been through the worst as part of their childhoods. And who will take on our state’s fractures as they probably become the country’s caregivers themselves.

Then, how can you not tell me that my country is broken. 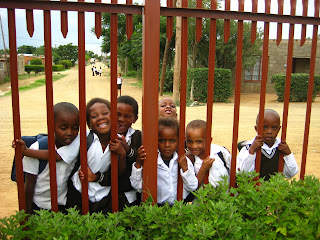 Posted by Champagne Heathen at 18:40

Reading this is heartbreaking and so so true. It sometimes seems too much to solve. As you say, noone knows how to solve it.

I have no answers.

Eish. My heart breaks. Again and again. It breaks.

SA will never reach its potential unless we solve poverty and all the problems that comes with it. We cannot have millions of people in the country living like this. We cannot.

Po - Thanks for the sweet comment. Me too... no answers.

Rev - Yup, back and as intermittent as ever! How you?

The Spear - Exactly, and if people keep living in the desperate state they are... then where is that leading us. Too bizarre to even imagine.

Oh Champs. Thanks for this beautiful, yet heart-breaking piece.How accurately you capture the story. Only got to see this now...much needed...this needs to be on the front page of the Sunday Times...Seriously... People don't only NEED to know...they HAVE to know....

:) Thanks Nickita! I reckon a good FWD hit on the email helps when Sunday Times won't publish! :)