All in a day's work

Basotho land. A place of 1.8 million people all slightly preoccupied with their triangular hat. Everything from hotel names to symbols to actual buildings shaped after this endearing piece of headwear.

Not that I saw a single one of the people wearing it in Maseru or the Mashoeshoe airport – run by what seems like the total of 5 people & one borrowed car guard to guide the daily plane in.

Ok, I exaggerate. I think there are four little 30-seater planes flying in every day. One of which on Monday morning held me & my colleagues & my boss who seems to get off on mentioning such things like how that noise was the landing gear unable to unlock and how we are all going to crash & burn & die. Never work for a doctor. They have a sadistic sense of humour. 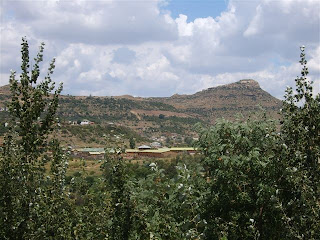 Maseru gave me the impression of that little dorpie Alexandria in the Eastern Cape having collided with Mount Frere in the Transkei, and the explosion having spread the rustic attempts at towns across this mountainous soup bowl. Not much was happening, but there was a great deal of it not happening. And this great deal is very widely spaced.

During a business meeting, speaking to one man who had just been reassigned to a new country, made me want to hand over some anti-depression meds to him. Or maybe even one big long hug (Well, the idea of that might have been inspired from something else about him as well, but moving on...) You would expect with a country of so few people & a size so minute and contained, HIV work could actually have a real impact. He has not taken into account when he first optimistically arrived a few years back that small populations also mean enormous bureaucracies.

And wow, but does Lesotho exist on bureaucracy and protocol! And I think this is all I will say on the subject. I would hate for Maseru’s electricity to come back on, and MePasela or TateThabo to be able to go back on line, and tumble across this here blog, read this post, and then all chaos will break out.

And the one in five Basotho infected with HIV, and the other four affected by it, would be the people to suffer. All because I typed a word out of line.

Honestly. It is ridiculous on how careful you have to be and what you say to who. And a diplomat I am not!

Otherwise, it was a thrill-a-minute. Those whole nearly fourty-eight lazy hours in a land that seems so familiar, yet….. is not your own. The laws are slightly different. The people & the language too. All the shops have the names you know so well. In their own rustic version.

And while the textile industry takes a major blow from China’s African hunger, at least I am now assured in Lesotho being the next big tv series producing country. One hour in the airport being thoroughly entertained, while the boss actually worked, by screaming & crying & loving and attack-of-the-killer-tomato violin background music playing to the dramatic story lines has assured me that Basotho soapies are all that!

Posted by Champagne Heathen at 10:35

Shame Champers - doesn't sound like you had all that much fun there. And you didn't get to press any Frenchies. Congrats on educating people though - that is a noteworthy acheivement :-) I have some interesting questions that Wiggly and I were chatting about in the car the other day. All around HIV and AIDS so will read your blog postings before asking stupid questions :-)

No no, it was fun. New places & their differences are always great to see & experience. Obviously I would've loved more than less-than-48-hrs & to have seen more than Maseru, but all in good time. All in good time.

No question is dumb. Trust me, some assumptions I have come across are dumb, and I just wished the person could've rather just asked first!

Ask away here or feel free to mail me questions at champsheathen at yahoo dot co dot uk
(Apparently you spell your mail address out like that here so as to not get spam...or something.)

oic - cool, thanks Champers. Perhaps delete your last comment so you don't get arb people mailing you?

Not too fear. That's what that email address is for. So people can communicate with me not just via my public posts if they feel more comfortable doing that. The address is even in my profile somewhere.

Robert - dude you crack me up! LoL

But Rob, I need you to stay darling muscled toned, dessert sun tanned, barefoot Namib you! But you can keep the obsession of me part going!

Phlippy - a darling amusing fool he is!