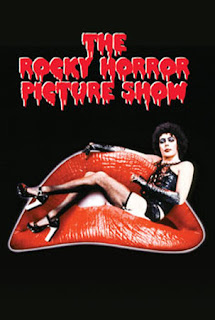 Ok, so immediately after reading this post…get yourselves and as many of your mates booked to go and p.a.r.t.i.c.i.p.a.t.e in the Rocky Horror Picture Show play (not movie rescreening) on in Jozi now.

Be SURE to don yourselves out in full transvestite gear & sexy scare outfits. And take your prop bag along, ready to throw rice/ cards/ toast/ water/ confetti, to pull on the party hats at "dinner" and newspapers for the rain, and shout when called for back at the actors. ...Someone maybe should have warned the rest of the audience about the cult ways one is meant to follow when watching Frankie pomp his way across a stage! I think us clued up lot caused much fright at first!

Basically… Be like us… and help MAKE the show!

…As one elderly lady told one of the crazy lesbians amongst us during interval. 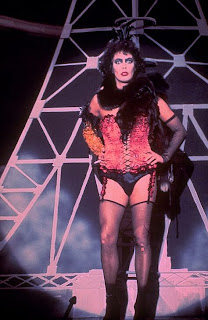 Or be like The Hubby & when questioned on his way out of the GENTS - in his little black skirt, ruffled silk girl's top, fishnet leggings, black wig & high heels - by a 60+ year old man on what was going on, quirkily shot a reply of “Oh, it’s free blow jobs in Stall 3!”….which was greeted with a joyous grin by the elderly man, who promptly left his wife standing and rushed into the bathroom!

16 eccentrics, and their eccentrics, took over the Victory Theatre last night. We were dressed to the nines – from red to black, wigs & poofy hair (yeah yeah…occasionally my wild hair comes in useful!), codpieces through underwear, boas and riding crops, lacy red-lined bodices over fishnets… And these were more the guys than the girls amongst us!

And through it all My Boy proved his worth. If ever I had worried my crazy ways (or rather those always thrust upon me by the other boys of my life) might be too much for him – last night quelled all my fears. And throttled off all of his inhibitions.

The homosexualities have awarded him FULL POINTS. And then some. For joining our growing habit of dressing All.Out. There in a red plastic mini dress borrowed from his sister. Pink Feather Boa. And Gold fishnets! To which I was allowed to add a pink wig, tiara, lipstick, eye shadow…and maybe fell in love with him a little bit more.

He spent most of the show just chuckling and shaking his head, as we danced the Time Warp, shouted perverted comments to actors, and threw all the props at the wrong times.

Or when I gave my own standing ovation to the incredible body that was “Rocky Horror” last night. Ooo la la!!! 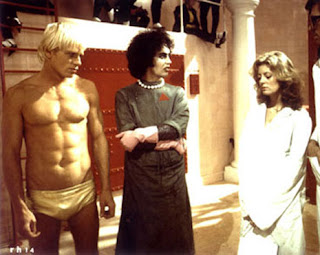 But I left the muscle man in his gold hot pants & rather whipped the drag queen back to my bed that night.

Obviously not without stopping in Melville to dance up & down 7th Street to stares till we found a joint playing Gloria Gaynor & what all queens & eccentrics love the most…. It’s Raining Men!

To those who know me - I am sure photos will be up in no time on Facebook. But The Boy has begged not to be tagged. Ha ha!

Oh....as for the actually acting IN the show... Umm....I can't really recall how that was... But go along anyway!... I now need to relocate half my make up borrowed "quickly" by the boys!
Posted by Champagne Heathen at 10:35

Oooh you lucky thing! I went to this at Spier a few years back - the dress-up was rather limited :-( The most amusing bit was when we went to Tollies afterwards - you can just imagine how the rugby neanderthals reacted to the boys in drag!

Fuzzles - Last night's effort by the general audience was limited... which is why they loved us even more. Many of us overheard others saying "See! We should've dressed up!"

Ha ha! Good for you for giving Tollies the culture shock! :)