"TIAAA - This Is Archaic Angolan Africa" Says The Boy

So the reason for wanting to be Angola... is that The Boy has left me. Indefinitely! Or rather from one to two months. He is trying to drive me crazy with jealousy as he sees a snippet of Africa that I would LOVE to experience. All paid for. In the name of work:

This is going to be 1 interesting adventure. Already my eyes are popping out of their sockets – strange sights, very weird smells, crazy looking people. It’s bloody hot and humid!

It’s an archaic system hat runs on organised chaos with screwed-up infrastructure. So much potential, but just run to the ground. 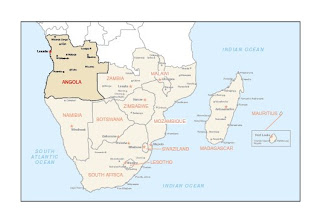 Email Subject: TIAAA (This Is Archaic Angolan Africa) where you're just happy to be alive, let alone having the luxury of internet and email connectivity

Our arrival in Luanda was interesting.

As we arrived yesterday I see this scene straight out of Lord of War, where they make that emergency landing and then the locals come and scavenge the plane. Yes on Luanda international airport’s runway this very same scene is unfolding. I learnt today that it was the remnants of a plane that crashed on Monday as its undercarriage fell off during take-off – madness I tell you!!

Those men in the airport in their white coats are quite scary, they wait to check for the yellow fever cards and there is just chaos and panic as people rush to get to the front of the queues. The rest was pretty easy and I didn’t get roughed up, although I think it is a random luck of the draw thing, as people were being directed into the little rooms in front of me, so I consider myself lucky that I don’t have an enlarged swollen anus with latex residue in my crack and up my ass.

We had to wait at the airport for an hour though, as the guy who was supposed to pick us up was late, much to our annoyance, but then when he arrived and we set off it was apparent why. Luanda’s traffic situation is ludicrous! How the people don’t bash into one another, I don’t know, and the traffic jams are crazy. It takes you ages to cover short distances from place to place and it’s a maze of narrow streets, one ways and just general chaos, and this all while you try and dodge all the holes (as in trenches like that pic you sent me) in the roads. The scooters are the strangest though, lots of scooters scooting around, nipping in between the cars and the dodgy blue minibus taxis. We almost bumped a few scooterists and by the looks of it most of them have never heard of/seen a helmet before.

Most of the time [driving to some island in the bay] was spent in traffic getting there in our guarded escort vehicle (very foreign to me to be driven around like that). We ended up in a very nice bar on the beach, after trying to explain to the guards (who can’t speak or understand a word of English) that we wanted to be collected in 2 hours. They had to call their supervisor on the phone who can speak English to act as a translator, quite amusing, but ultimately frustrating, so that phrase book (which dumbass me left behind) will come in handy.

Luanda is ridiculously expensive; all we could afford without blowing all our money on the first night was two local draughts of beer, which still set us back 12 dollars each. The food was ridiculously expensive and I wanted to have a Pina Colada with the nice beach setting, but that would have cost R100, which I thought was madness.

This morning began at 04:00, waking up and having to get ready for our pick up, which ended up coming 20 minutes earlier than expected, with an ex Angola Unita rebel chasing us to get ready, I couldn’t even brush my teeth. It was also raining, the first of muchos more rain to come in the next month.

The charter flight was interesting. A very small plane, takes only about 15 people and if that is the condition of a private plane, then I DON’T want to see the local internal domestic planes, cos half the seats were broken, there were missing pop rivets on the wings and the heater didn’t work (which I may add is very uncomfortable when you are wearing a t-shirt and the windows are starting to freeze – yes – freeze! It was sub-zero temps in the cabin for most of the trip, so it was a very chilly flight).
As we started to descend the windows de-iced and it revealed such beautiful scenery below which made the uncomfortable flight worth it. Everything is so green and you can see all these amazing features you learnt about back in high school geography.

As we started to near [the town] realised just how remote we are, there is nothing around us for miles and it is this dusty little shanty/mud-brick village. The airport terminal is a slightly larger tin shack (thus distinguishing it from the village homesteads) and runway is this dirt track with these wrecked planes littering either side of it. These were all from crashes during take-off and landing I was told.

So as we hit this dirt runway I start stressing a bit, but it all goes ok and we are greeted by a bunch of menacing looking Company officials in big land cruisers and a smaller party of officials (police/army??). We are debriefed not to speak to anyone and just climb into the vehicles, this after having to give away our passports to some guy, whom I haven’t seen since. [He got his passport back a day later!]

After clambering into the vehicles we are off down this road which skirts pass the village. Scenes varied from a guy busy bathing in a water-filled hole on the side of the road, woman carrying colourful fruits and baskets on their heads and children running around, all as we try dodge the scooters that are heading for and past our vehicles. (Still no helmets, I think I may be on to a business idea here, importing crash helmets into Angola).

The only thing I am battling with now is the heat. It is very hot and humid - inside the office is hotter than being outside - so I am sweating away here without an aircon. It’s irritating to see that only some offices have aircons here, oh the privileged few I guess.

I’m so looking forward to the cooler evenings here, it will be a lot more comfortable and an evening run everyday will be a welcoming relief. I think that I will be able to run quite easily into the village, but I will have to see if I get mobbed by yobs or the Angolan equivalent thereof before I settle into a routine.

I went running after we chatted, but it was getting dark and all the homes in the village start lighting fires and burning paraffin stoves or putting their generators on and it was so difficult to breathe. So it wasn’t the most enjoyable runs I've done and its not great running on the dirt, in some places it is very sandy, like on a beach. After that, I got back to them fumigating the camp, which involves running these two-stroke machines that basically spray petrol fumes everywhere to get the mozzies and I had left my tent flaps all open to air, with the mosquito nets up so when I got back from the run and wanted to stretch in a place where I wont get bitten (in my tent) it reeked of petrol smoke fumes. I couldn’t even see my hand in front of my face the smoke was so thick, so then I just had to stretch on the dirty concrete floor of the office and when I went back to get my things to shower, it still stank.

You won’t believe this and now I understand the concept of “danger pay”, but there are additional dangers to the landmines and malaria that I now need to worry about. They have freaking lions roaming around in some of the areas!!!!! They want me to go into the field with lions on the loose, are they mad??? How on earth must I work while my leg is being chomped on by a hungry male lion??? Any ideas, cos I’m hard up here!

And, funnily enough, skyping between rural Africa and me doesn’t provide the greatest connection!
Posted by Champagne Heathen at 17:25

Awesome read - makes me wish like hell I could just get out of this concrete jungle and bugger off to deepest darkest Africa again.

Hmmm. Some days it is too deep & dark... I don't need a lover without a limb or with some fatal illness! But I know, I am crazy jealous of it all really! More to follow soon.

Shame babe, it is a double edged sword that one.

My cousin is a cameraman, and has to dash off on location every so often... this last time he went to Namibia recently, and his baby is just on 6 months and he's gone for a month. Needless to say, his partner isn't too thrilled, although she's used to it to a point.

All I can say is that I hope the time goes fast and that he is returned in good shape when he's ready!

Thanks!
And ja, we are having lots of discussion about how people can do this all the time in their relationships! It must be so taxing.

I hope you enjoyed today's writings...