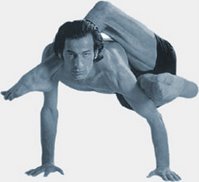 I went to my usual yoga class last night. Orange robs and chanting and urging me to put my legs a bit further behind my head. All great fun. I love it.

It helps that my classes are completely gender-equal. And it is not just older crazy German guys who chuckle away & make nonsensical comments throughout the hour & a half. But also nicely-toned younger guys. Ooooh baby. Ooooh baby. There is something about a supple vegetarian shaved-head man being able to lie flat against his left leg, and touch his nose to his shin….

….. ANYWAY…. Last night we had to do extra chanting. It was a little odd. It was even odder when the new instructor guy kept helping only me to restructure my poses & ignored the girls who were busy tripping up & getting knotted. Why was he bothering with me? Did he not notice the “Plastered Around Italy – Drinking Tour ‘96” t-shirt I had on?! Granted it’s not mine, but if I now have it in my possession it means I hang out with such toxicating karma-insulting reprobates, let alone indulge in such practices myself.

And then he’d compliment me on my cobra position. It is all about how I stick my tongue out to touch my chin!

He explained to us that the vibrations from the chants would unblock energies in our souls that can be very powerful. People have even been known to burst out crying during such classes. Oh great. A chuckling sobbing German is just what I need to be focusing on as I try to “be The Tree”!

Don’t ask me what all that chanting was about, but my left shoulder blade today is in a slight amount of pain today. If it persists I am going to commence back-rolling along this office carpet. My colleague is already certain I am “touched’ so she won’t mind. Plus she is Zambian, so maybe she’ll just put it down to a white African youth “thing”.

Straight after class I did the very therapeutic & inner-peace thing, and poured a coupla GnTs down my detoxed system. Apparently an hour later I appeared stoned. I preferred to drawl that this Spaced-Outness was meaning I was At-one-with-the-energies”….now pleeeeasse call that waiter over again….

And then my dear friend told me he had finally told his mother that he is gay. I am so happy for him. I am so proud! Fck. His family are very strictly conservative Afrikaans. Think Witbank en rugby en braaivlies en all daardie kuk, né His mom said she loves him no matter what, and for ages had assumed he was. I love parents like that. Thank you my dear friend’s mom!

Then he & I spoke about the whole new law giving gay men & women the ability to marry. He theorises that the absence of such a legal right is what has allowed the community to be so frivolous in their sexual behaviour for so long.

I said….Welcome to the concept of “The Shelf” baby. HA HA! You’re screwed! And only in a monogamous way now!
Posted by Champagne Heathen at 09:57

The sore shoulder is your body's way of telling you that your chakra/chi/energy thingie is blocked ;) Thats what the guy must have been picking up on. It had nothing to do with champers hotness at all ;P

Yay for your mate coming out the closet!
Yay for G n T's after yoga!
Yay for starnge chanting! (hilarious)

Happt Friday Champers (hopefully with no crampers after the yoga sesh)

Chews - But yoga is meant to unblock this, not just slap a red light on the block!

I tell you, it's my cleavage!

Peas - Yay! Yay! Yay! You look like you might have been hitting the GnTs already, with that spelling :P

Well I would encourage it some more. Attention is healthy for your chakras.
;-)

GnT's are indeed very soothing. I used one to soothe my hangover last night.

I used to do yoga with a bunch of grannies. It was always embarrassing when Patty-the-octegenarian smoothly maintained her dog stretch, while I was left nursing my cramping butt muscles.

Jams, Except that the instructor is a good friend of the loco German more than he is a bald young hot instructor. Now attention from the OTHER instructor...I have been trying to get for months, but he doesn't seem to care how lopsided my asanas are.


So then, Koeks, please bring me a GnT!! Your left butt cheek?!? What kinda dodgy yoga classes are you attending??!

It's your cleavage is it?
Is he a yoga instructor or a farmer?
So you think he wants to yank your puppies??

as long as they teaching you the cleavage exercises its all good ;P

I don't know too much about yoga given that I can barely touch my shins in a stretch, but I do know a bit about cleavage..seriously now - I loved your Special Assignment post. All the nostalgia about last days at uni, and the warmth of somalis almost made me cry a bit.

A lopsided asana is merely a blip on a GnT radar...who needs yoga instructors that lust after your chakras when you have GnT???

Unless of course he's the other one that you'd like to care about it all...

Harry - excuse the delayed reply, I got caught up in the horror of a farmer yanking puppies about!! Ouch!

Chews - oh, please do demostrate such exercises! I have yet to have heard of them!

ATW - Where've you been!!? Aaah, thanks for the very sweet words!

Spooning - *shiver* maybe not him. You'll be amazed at how beneficial a cleansed body reacts to a GnT, so I recommed both for ultimate benefits!

To improve balance and all!?!? Ha ha. I once did a yoga class half pissed. It makes one very wOoooOoOZZzy!