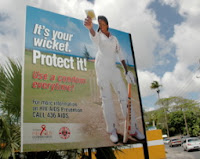 I have about as much interest in the game of cricket as it probably has in me. We are acquaintances rather than long-parted lovers. The only time the game really makes me smile is when I have a ticket-to-be-torn in hand as I enter Wanderers’ stadium. Bring on the bucket seats, lumo lights, plastic mugs filled with beer, and cute boys getting excited over ridiculous sporting moments!

So as the World Cup Cricket…or rather… Cricket World Cup (CWC) rolled about this year I have not even attempted feigned interest. Until…. I read that the padded, batted & cupped men in white are supporting my most trumped cause – that of HIV and AIDS.

Hopefully by “supporting”, I do not mean their shagging exploits with giggly girly fans. Stop that! Condom up or put it away, young man!

Rather, someone had the bright idea that since this event was being held in the land that has the highest HIV infection rate in the Northern hemisphere, over-infected South Africa & India are top participants (I think??), and since the CWC reaches an approximate 34 million people, what an excellent platform to remind the youth to protect themselves should they well, get batting & ball tossing at a tender age.

“AIDS is a leading cause of death among adults (ages 15-44) in the Caribbean, and 250,000 of the region’s residents are living with HIV or AIDS. Half of those are women, and a third are young people between the ages of 15-24”. (CaribbeanNetNews)

There will be 30 second Public Service Announcements (PSAs), featuring leading cricket players, to screen on the TV, radio & perhaps on the stadiums’ playback screens. You will also note in the initial & then again in the final matches, players & officials will be wearing the red and blue ribbon of the UNICEF campaign: Unite For Children, Unite Against AIDS.

The campaign will focus on Stigma & Discrimination and Prevention as its 2 priority areas which will be promoted by prominent cricket personalities. (More CaribbeanNetNews)
To quote the ever-intelligent, ever-blunt Executive Director of UNAIDS, Dr. Peter Piot:“Young people today have never known a world without AIDS. Sports stars - such as top cricket players - can act as role models for today's young generation and reach out to them on AIDS issues…. Sport is a force for change that can break down barriers, build self-esteem and teach life skills and social behaviour. By highlighting AIDS issues, the ICC Cricket World Cup and its cricketing stars are showing exactly the kind of exceptional response needed for the exceptional challenge of AIDS."

Back when you were a youngster, obsessed with your top sport’s star (Ha! Back when. Many of you still are!), would his advising words on “sexual protection” & his solidarity for such a cause really have impacted on you & your rules for later living? Will the role models influence the way teenage boys react when it comes down to sexual acts?

Do we even have a moment to worry about such sociological, or is that psychological?, issues right now, as countries represented at this tournament are witnessing their fellow citizens, right in those productive age groups (between the ages of 20 to 54 years), die from HIV and AIDS … “and it is for that reason that we cannot afford to take our eye off the ball. We need to ensure that everyone is protecting his/her wicket,” Dr Carol Jacobs, Chairman of the National AIDS Commission stresses.

With the game of cricket being “one of the really basic cultural things in Barbados and the region” is it not an excellent mechanism with which to toy with young boys’ & girls’ minds. “The campaign was created to focus on such culture, while allowing the commission also to target select groups”.

But do not worry, if the words of Mark Boucher, Brian Lara, or Andrew Symonds are the last thing you want going through your head when you & some attractive lad or lass are heading for the outfield, then you can think of one of the campaign’s billboards; of an attractive young woman dressed in her white cricket clothes, complete with bat, pads and gloves . . . with a condom in her outstretched right hand remiding you:
"It's Your Wicket, Protect It! Use A Condom Everytime!"

Let the (Cricket) Games Begin!!
[Hey! That’s me!! Business Day Weekender article: Self-centred soap box or discerning analysis?
Thanks Annaleigh & good article. I really enjoyed your point of blogs changing from Reactionary to Reflective.]
P.S. Blogger is being a bitch today. This took about three republishings to achieve the original!!
Posted by Champagne Heathen at 09:30

I'm all for celebrities - be they sporting role models, film or media icons or whoever - throwing their weight behind HIV/AIDS awareness campaigns.
But haven't they been doing this for close on 20 years now?
What we need is a change in mindset to defeat HIV in this country and others like it (aside: are there really any others like it?!?).

Sadly, I just don't see where that's going to come from. I've been going into Khayelitsha for 2.5 years now and haven't seen any change in anything. Although, I could say that things don't seem to be getting worse either. XDR-TB may well change that though.

So many analogies come to mind... Our coaches motto was always
"Never go into bat without a box on" and
"...always wear your own box, never share"
More shall come to mind, nice to see that our guys are supporting the cause. As always, grrreat post.
P.S Nice interview, waving your wine glass around, hahaha

6000 - It is what I am also wondering - will your favourite personality saying "wear a condom" or "protect yourself" or "don't discriminate" in 30 seconds or on a billboard really influence your way of thinking when it comes to the crunch (pun?!).

I think I need to hunt down some research done on this idea.

Forget 2.5 years, my industry has been desperately searching for evidence of changes in risky behaviour for 25 yrs now!! sigh.

DaveRich - Yeah, I am expecting some interesting rephrasing & analogies in the comments today!...and yes, I always prefer to wear my own box!

I told Annaleigh that I could only make the interview if Biz Day was willing to pick up my bar tab afterwards!! ha ha!!

Yay cricket...well I love the sport, it's great. After finding out that the CWC is creating awareness about HIV/Aids I am even more happier...yay cricket!

Did they get you drunk Champs?

There is of course the classic commentator faux pas...
"The batsman's Holding, the bowlers Willy"
Of course reffering to Mr. Willy and Mr. Holding. Cricketing greats of the 60's

Oh yes, as a girl cricketer you wouldn't wear a box, rather a gum guard.

As the one guy in The Beach said...To the two pillars of society...[religion] and cricket!!

Kabs - OOooH! So the game is on Fri. Good to know! Naaa, I do know all the technicalities & all, & I can watch it. It just does not THRILL me to my bones.

DaveRich - Nope. I remained as professional as I usually am. HaHaHa.

Insanity - :) We could change those pillars to Sex & Cricket.

Girl cricketers have their own boxes already ;P

I used to hate cricket until someone had the courtesy to explain the game to me. Now I really enjoy it as wallpaper...

Just pictured guys vigorously trying to shine their balls before attempting to bowl some lady over!

Dude, I read the Weekender article in Cape Town - and wanted to say thanks for my shout out, I wasn't expecting it at all! And nicely quoted for yourself too. :)

As long as you don't dribble one down fine leg...

Chews - no, no, pillars can't be opposing.
Yeah yeah, those still require extra protection. Trust me, they also do not enjoy having a cricket ball smacked into them!!

Jam - Yes, I have found the game makes the ultimate stare-and-zone-out backdrop!

Rev - ow! How long will it take to make those shine! ...actually, don't answer - it might get dodgy in here.

Peas - Pleasure Peas! Well, she did write what I said there - that you are the 1st blog I read in the mornings. Plus, they are probably trying to redeem themselves to you in every way possible, for one day when they wish to ask you to run the paper!

DaveRich - AK!!...don't you have a restaurant to go & manage rather than planting these disturbing images in my head!

So do girl cricketers get "stumped" by boy cricketers?

Am office bound today working on some new specials, so nope:-) I can go on all day.

If its boxed and can shag, Champers willknow it andhit is for six if it ain't condomed up!

Wiggles - only when matches are held in winter temperatures!

Robs - Damn straight. Howzat for being on the ball!

Last week when I was searching for P24 Antigen test I found a nice guide on HIV treatment detailing how to cure the deadly disease through herbal means. Good and nice guide downloadable from following URL http://www.helpcure.com/hiv/ .

Well this is an amazing subject. This blog is really one of the apt one I have found on this subject. I appreciate the blog master and hope will add more informative posts to this Blog.