My desire to post today is nearly as overwhelming as my desire to work today. Null. Void. Depleting with each office minute, feeling the desperate need to make my ill-fuzzed head maintain concentration.

We still have yet to determine whether this is flu or some strange tropical disease, but I do find it highly coincidently that today just happens to be African Malaria Day.

Boss No. 2 (the harsher, more cynical ex-doctor) is not convinced I am being plagued by any bitch-of-a-female-mosquito’s salvia-transmitting illness. Nonetheless, he still has allowed me to head home, or to make me tea. Shame. Sweet.

And in honour of the day, I will continue my habit this week of predominantly cut-and-pasting fascinating info. And during my research to bring you the most up-to-date relevant basic WOW! information, I did become completely lost in a mine dump’s worth of information. So if this does tickle your fancy, follow the links onwards…

The World Health Organisation’s website probably offers the best wave of Malaria info to start riding. And what it has to say basically can be translated as, it is not as easy for most endangered people to simply head off to their GP and ask for some pills that offer fcked-up dreams. People living in the malaria areas are in constant fatal danger.

-About 40% of the world’s population are at risk of malaria;
-More than 1 million people die from the effects of the disease every year; with 90% of these deaths occurring in sub-Saharan Africa;
-Every 30 seconds a child dies from malaria. It is the leading cause of death among children under five years old on the African continent;
-Malaria is caused by parasites of the species plasmodium that are spread from person to person through the bites of infected mosquitoes;
-It is not age-, gender-, race-specific;
-Inappropriate use of antimalarial drugs in the past century contributed to widespread resistance in the malaria parasite to drugs such as chloroquine, leading to rising rates of sickness and death. Over the past decade, a new group of antimalarials – known as artemisinin-based combination therapies – has brought new hope in the fight against malaria;
-Malaria control includes early diagnosis & prompt treatment, distribution of insecticides and treated bednets;
- The nets are effective for a number of years (3 to 5 years, depending on models and conditions of use);
- Indoor residual spraying is the most effective means of rapidly reducing mosquito density. Its full potential is obtained when at least 80 % of premises with malaria vectors are sprayed. Indoor spraying is effective for 3 to 6 months, depending on the insecticide used and the type of surface on which it is sprayed.
- HOWEVER, read this article to realise that with every GOOD in public health fighting, there is at least one BAD: Anti-malaria pesticide affects male fertility
-Pregnant women are at high risk not only of dying from the complications of severe malaria, but also spontaneous abortion, premature delivery or stillbirth. Malaria is also a cause of severe maternal anaemia and is responsible for about one third of preventable low birth weight babies. It contributes to the deaths of an estimated 10 000 pregnant women;
-Malaria causes an average loss of 1.3% of annual economic growth in countries with intense transmission. Malaria has lifelong effects through increased poverty and impaired learning. It cuts attendance at schools and workplaces. However, it is preventable and curable;
- Millennium Development Goal 6 is to Combat HIV/AIDS, Malaria and Other Diseases.

- HIV cannot be transmitted via mosquitoes [ed. let me know if you'd like to know why not];
- HIV-positive people are more susceptible to contracting malaria and have a decreased positive response to standard anitmalarial treatment. Malaria also increases the viral load in an HIV-positive person (leading them closer to the stage of AIDS);
-The responses to HIV & Malaria can work in conjunction. Fighting the one builds up the resources & systems to fight the other [ed. let me know if you'd like more about this].

So….you get bitten by the dumb flying chick insect. OR! Apparently it can also be transmitted by blood transfusion and by contaminated needles and syringes.
The parasites then multiply in the human liver and bloodstream causing fever and chills and can lead to death if left untreated.

- Falciparum malaria, which can be fatal, must always be suspected if fever, with or without other symptoms, develops at any time between one week after the first possible exposure to malaria and two months (or even longer in exceptional cases) after the last possible exposure. [ed. Uh oh]

Which parts of the body does it usu­ally infect?
Parasites are injected into the skin capillaries by a mosquito. From there they travel via the bloodstream to the liver, where they develop and multiply in liver cells before entering the blood stream again and invading for further re­production. From there other internal organs, e.g. the brain, can be affected as clumps of heavily infected erythrocytes start blocking capillary blood flow.

What are the symptoms?
The classic clinical course of malaria consists of bouts of fever accompanied by other symptoms and alternat­ing with periods of freedom from any feeling of illness. The intermittent type of fever is usually absent at the beginning of the disease, when headache, malaise, fatigue, nausea, muscular pains, slight diar­rhoea and slight increase of body temperature are the predominant and vague symptoms, often mistaken for influenza or a gastro-intestinal infection. Most severe forms of the disease result in organ failure, delirium, impaired consciousness and generalized convulsions, followed by persistent coma and death. [ed. Uh oh. I have 5 of the 1st 7 symptoms.] 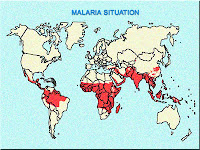 So there you have it. Man, we are going to be one clued up lot by the time I retrieve my head & get back to blogging about my life’s daily events & rambling thoughts!

Happy Malaria Day! Kill a mosquito for me!
Posted by Champagne Heathen at 11:17

Jawelnofine! Come here and find me a mozzie and I will moer it for you.

Sorry Champs, I simply COULD NOT read through all the research, but i did see the bold bit and i will kill a mozzie for you! And also,l I am so sorry for you feeling crap. CAn i bring you a virtual cuppa tea and some marmite soldiers?
hugs and kisses

Robs - don't rub it in that your cold climate means NO irritating bugs!

HPF - Not a worry at all. Thanks for listening to my order though! Ooo man, those marmite soldiers sound ridiculously appealing!

My mate stayed in Tanzania and the hospitals there are on the ball with malaria. The worst thing that will happen to you here is misdiagnosis as the doctors here aren't familiar with it. Apparently it is key to take blood when the fever is at its worst to get an accurate diagnosis.
BTW have you heard of certain anti-malerial drugs that cause psychosis? Nice.

Noodle - that's brilliant. Thanks for that info. So I will tell my stressing father that it is useless to check now if I MIGHT have Malaria (versus flu) as I ain't sweating yet!

Psychosis - lovely! Go to Zanzibar & start seeing Sea Monsters climbing out of the sea & into your dhow!

hehe - maybe you picked up something on the weekend? Snogged anyone strange lately?

Mozzies. Hate the fuckers. The only thing I dig about winter is their demise. Do mosquitos have any positive effect on the ecosystem or are they just pure oxygen thieves?

Chews - he wasn't strange. No wait, he was. But strange in a good healthy way. PLUS it takes 3 days for symptoms to show through. I was feeling sick by Sunday night. Couldn't have been w.end events! HA!

Wiggles - I say, take them on! I'll arm you with an insecticide pack & you can roam the countryside taking them out!

Jamaloni - You cannot believe how many would swarm around us as it got later and later and the anti-mosquito candles were taken away by the candle owners. And no amount of gin or jamesons seemed to save me!! Little bastards!

Apparently nets are 70% effective if properly used (sounds like a Trojan commercial), but one of the problems for poverty-stricken countries is the nets have to be treated with insecticide every 6 months.

Found this video (get/grab code at http://thenewsroom.com/details/238766/Health) - there's a company in Tanzania now making nets that don't have to be retreated. Sounds good to me.

Hi Daniel - thanks for the visit & for the comment!
And more especially for that info. Yes, what good is it if the nets have to be treated every 6 months!It is difficult enough to get the nets to some communities, let alone ensuring people keep revisiting them to retreat the nets!
That company sounds very good!

Wow Champs! Nice post there...looooads of info. I really hope you don't have malaria BTW.
I'd like to know why mosquitoes can't spread AIDS.
And did you by any chance catch a program that was on (yonks ago) where they've been messing about with the Anopheles (excuse my spelling if it's wrong) mossie to make it glow in the dark? And also not be able to reproduce? (not sure if that was the same experiment or a different one).

I do have a remedy for you if you are always bitten, but it's not pleasant at all...very very effective though. Makes your blood so bitter that both mossies and ticks will run to get away from you. Take one tiny (the tiniest tiniest you can imagine...like the size of a match head tiny) aloe crystal a day. Sneak it past your tongue in banana or yogurt, it's really vile! Takes about two weeks to get into effect. (Word of caution: if you take too much - remember the match head - it is a potent laxative). Yes well, still,
everything has a downside right?

Louisa - thanks! I hope it helps people start to understand how serious malaria is to Africa. I am only just starting to comprehend.

I will be sure to post on mosquitoes & AIDS next week! Today's a bit mad.

I am loving the idea of those two experiments! I will be sure to look out for info on that! Ha ha! Can you imagine lumo mozzies. Although, in Mozam it then would've been impossible to sleep with SO MUCH light!

As for prevention ways - I think I will stick to my GnTs and candles and spray!! :)

Feeling better! And a day of sleep tomorrow will definitely help! Happy Thursday!