Hounds of the Ice 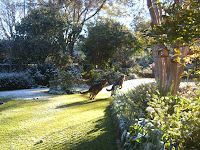 If you have not heard yet, then you do not have a mother as spirited as mine. She had been trying since 6am to wake me up to let me know about the snow. She'd even considered waking me up sometime past midnight to watch the snowfall.

6am was as late as she was willing to hold off. And then it was sms's & door knocking. 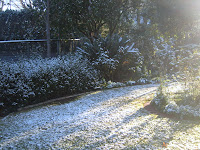 But I am her child, and am as spirited when it comes to enjoying my sleep. Especially after a heavy battle against the cold front, armed only with a bottle of red wine. We won by the way. 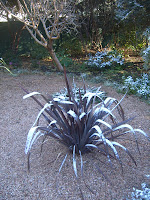 She's still claiming that this is the first time since 1981 that it has snowed like this, but I recall perfectly well waking her and my dad up at about 5am one varsity holiday to declare it was "pouring" with snow. I had just stumbled into the house. I think my folks prefer to "conveniently forget" that incident, and put it down to their kid's experience with mind altering substances. Hell, I was also claiming I had just gotten engaged to my brother's mate in the VIP room of Monte Casino.

But back to my master pics of the snow... 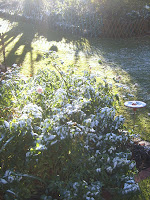 Spying on the Neighbours 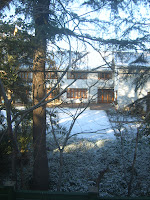 Hounds of The Snowy Fields 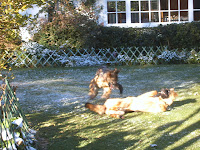 Death of the Flower 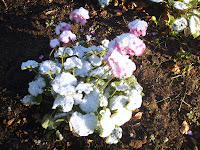 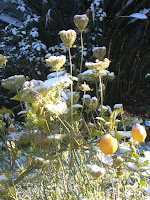 And the final image, my personal favourite, I have titled: 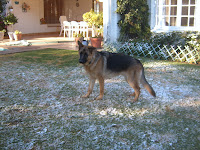 Posted by Champagne Heathen at 09:48

i still wonder how i manage to stumble from my front door to the car, go "humph, why is everything so wet?", drive allllll the way to work, stumble outside for a cigarette, go "humph, sure seems like a lotta ice", stumble back to my pc, open my emails, and THEN only notice 9thanks to email notifications and MSN status messages, that it actually bloody snowed last night!

It made me aware that i in fact DO walk around with my eyes shut and that i am in fact NOT a morning person as i so often claim...

Had an epic snow battle against the staff of six last night 7th street was a battlefield at one o clock this morning.

HPF - Maybe it'll all happen again tonight. And then I'll send over a brass band, or Vida guys - coffee AND noise!

Dave - aaaaaah! I hope you got them good with a snow(ice)ball.

Dolce - and I am going to let you feel that jealousy. Just cause you are in the Cape, and I am missing the cape at the moment.

This is my kind of weather.

(HPF will know this joke; HPF, try not to sigh, but I recommend a lung specialist - if you find a good one, schedule me in sometime before things start growing in them... this is a horrid thought, but one we need to face, methinks)

Where I am from originally, weather conditions were slightly more unpleasant than here.

It's not my fault if I want to turn the frying and cooking device down a little.

The climate was way different back on planet Krypton...

Its 1 thing being cold but when its cold ad it snows...ita aaaight!! everything so pwetty.