I read this last night. I liked it. I wanted to share it.
(It comes from The Zanzibar Chest by Aidan Hartley, a man who covered Somalia and Rwanda in the early 1990s for Reuters.)

And as I was typing it out I have just realised… it resembles the thoughts and arguments I have had for two decades now. Well, more from about the time my oldest brother hit teenage-dom and started the angst years of bitching and explaining to his younger influential siblings about “the system” and “conforming”. About “the salesman”. Can I blame it all on him then! Naaa, I could only be grateful for such a perspective.

It also shows why I think that Sandton, located where it is, is a sham.

“Lizzie and I arrived in the polluted heat of a London summer. We stood frozen at street corners as a blur of pedestrians burst out of underground trains and spilled like ants down pavements. The crowded bars, the expensive shops, the fashionable clothes – to me it all seemed a population rushing about to no avail.

….Waiting for the underground train, I stared at a huge poster of a woman in her underwear staring down at her own breasts. Hello boys, she said. At the movies we witnessed sickening violence, except that this time we held tubs of popcorn between our legs and the gunfire and screams were broadcast in digital Dolby.

….We had escaped a place where evil stared right at you from the sockets of a child’s skull on a battlefield, only to arrive in London, where office workers led lives of such tedium and plenty that they had to entertain themselves with all the fucking and killing on the big screens.

….So, here then was the prosperous, democratic and civilised Western world. A place of washing machines, reality TV, Armani, frequent-flier miles, mortgages. And this is what the African are supposed to hope for, if they’re lucky” 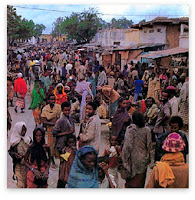 Posted by Champagne Heathen at 09:30

Darling,
This is all well and good but you need to get more exercise sweetie. Yes, you do.

Purge yourself often too. Bloodletting I hear is the in-thing in France. Apparently it does wonders for the fellopian tubes. Just makes me dizzy and my balls tingle! Then I grab the nearest woman and do wonderful things to her.

I bet you smiled. Too bad you are on another continent.

Crazy man!
And yes, it did make me chuckle!

"such tedium and plenty that they had to entertain themselves with all the fucking and killing on the big screens."

I've often thought this, but not as articulately.

BTW, you're going to NY? Give me a shout if you want the name of a fluffy but fab SA girl who lives there with her Swedish Man.

Now you mention it!

I was in NY. You knew I was going to NY but, sob, you never, sob sob, told me about the fabulous, outrageous and fluffy SA girl in NY. Whyyyyeee? Whyyyeeee not?

Am I not, sob deserving of a mere morsel of happiness at the banquet of life?

I have read the book, great. Unfortunately I lent it out and have never seen him or the book again!

Dolce - which is why I love plagiarim/ extensive quoting!

Thanks so much! Will mail now!

Ordinary Life - I have about 5 pages left of the book, but left it in my car last night. Massive dilemmas - haul myself out of bed to get the book & finish it. Or just sleep. ...let's hope I remember it tonight!

And ah well, books are meant to travel far and wide, i believe.