Are you checking your condoms 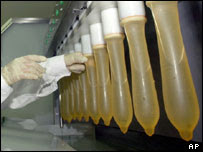 My “sources” are seemingly tight-lipped (Pun. Ha.) about the mounting media hysteria around faulty condoms that have been distributed by the Department of Health. News sources are offering up a bit more. Should word-of-mouth put out in the next while, I’ll pen it down here.

To keep it basic, and as hyped-down as possible…

In August/ September the company Zalatex was allowing faulty condoms to be distributed across a land just finding its sexually protective head. Once government discovered this, government recalled 20 milllion freely distributed condoms. So far, it has managed to get its fretting hands onto 12 million of these.

A government spokesperson has stated that “of the 20 million LSP condoms recalled, only an estimated seven million would have been directly compromised by the alleged corruption”.

Then a further 3 of the 7 companies from which the DoH (Department of Health) obtains its condoms were showing some “anomalies”. An audit took place. The batches from
the Kohr company failed the air-burst test. The tested batches from Juel Health and Sekunjalo passed the SABS audit test.

[So, it seems, a few staff members of dear Kohr Medical can be added to the list of people to whom I’d like to take a short sharp high-heeled kick to the head].

“During this financial year, Kohrs has supplied 5 million condoms to the Department. Of this, more than 1 million condoms have been quarantined at the distribution sites as part of the audit process”.

Mike McNerney, the SABS general manager of food and health, stated that "if a batch fails, that means the risk of failure increases, but not that all condoms [in the batch] will fail. But the bottom line is that the products failed and never should have been released... McNerney said laboratory tests, which often placed condoms under stresses above and beyond those of normal usage circumstances, might produce a worst-case scenario picture of the problem. We can't specifically quantify the increase in risk in terms of human use, we can only go off laboratory tests, he commented”.

“The quantities that would have been supplied by Zalatex and Kohrs…is 9% and 15% respectively of the projected 425 million male condoms supplied per annum” continued a DoH press release...

1. The Names of Blame are ZALATEX and KOHR Medical.

2. Check your condoms, and burn, break, or use as water balloons any and only those condoms with serial numbers:
-Choice condoms bearing the serial number 4308/ZLX
-Kohrs, with manufacturer's code 6809/MED/

3. Or buy your condoms.
Posted by Champagne Heathen at 11:05

Camps, looking at the pic you included, I didn't realise that they sold beer in condoms??

Hmmm. Rev. After studying the picture, I suddenly am concerned that your local barman might be watering down your beer as of late!

There was a statistic somewhere of condoms only being effective 86% of the time. Dunno where that came from though. Regardless, go buy your condoms people! The free one's aren't ribbed either ;)

Not to fear Chews - that stat is rather about 97%. GLAMOUR Mag does give out free sensitising lube this month though, to anyone wanting to spice up their non-ribbed free condoms.

I actually just read and noted that. Its true... Chews does not yet own a zimmerframe. He's still playing in the pro league. I am holding out for when he moves onto the senior league.