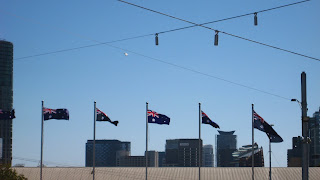 I had been warned that there are only 2 rules on this day.

1. To do absolutely not a stitch or inch or moment of work.
CHECK!

2. To have your first beer in hand by midday.
Uh oh.

Aussies replied to our sms’d questions of “Now what??” with – it’s a family day, get yourself to a bbq.

Greeeeaaaaat. We don’t know any Aussie families. And it’s a bit late to charm our way into anything, ain’t it.

Now what?
So we headed into the city and were confronted by more Australian paraphernalia than a Baz Lurman movie. Everyone was wearing flags as cloaks, flags across their boobs, around their heads, as bag fillers & cap jewellery.
Flags flapped flaccidly about the city from every pole.
How patriotic! How… odd. All these Human-Flags were foreign. But VERY foreign. Not a stereotypical Aussie in sight. 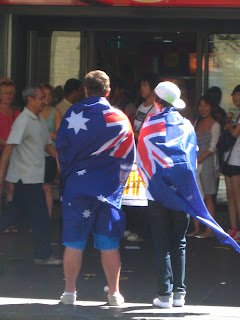 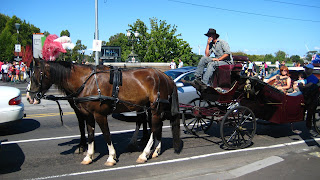 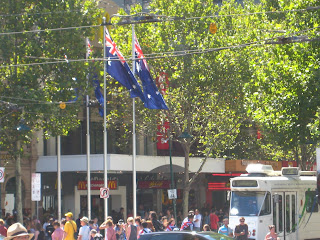 See. All the Aussies have families nearby. And all the families are hosting barbies. So all the aussies clear out from their own celebrations and leave us orphaned immigrants to fly the flag high.

So we watched some tennis in Fed Square & wandered about taking in the festitivities and buskers and foreigners watching me watching them watching me, till I could take it no more & declared it Beer O’Clock. 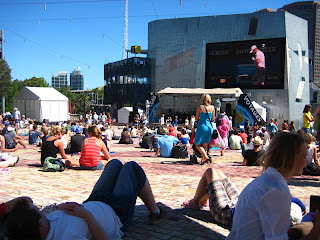 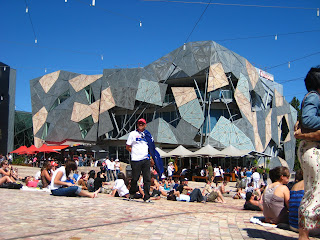 To which 2 mates responded with “Let’s Barbie on the banks of the Yarra. We’ll bring the slab & the kanga sausages. You just rock up”

And a good afternoon, evening, night was had by all immigrants in the end! 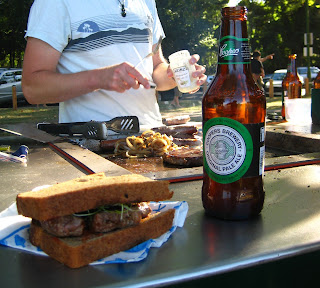 Because all barbie'd meat ends up between 2 pieces of pre-sliced bread. Note the free public barbeque being used. And the 1st of the day's beers. 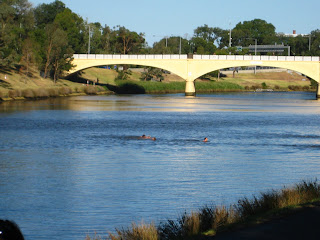 Aussies spotted! Drunk & swimming in a river you shouldn't swim in. 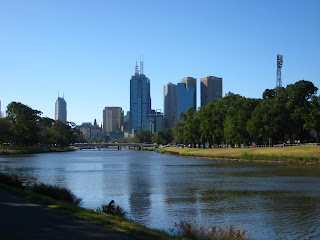 Initial view from our spot on the Yarra banks 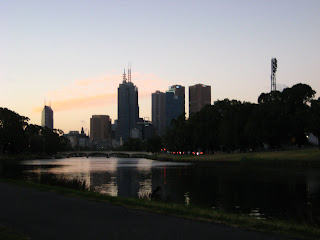 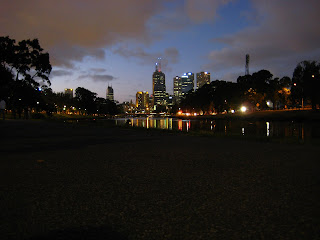 Final view from our spot on the Yarra banks. Then we stood up to watch the fireworks...which is exactly when my camera decided it had had enough of the day & died on me.


It is interesting that not all Australians celebrate this day.

Some people believe that this day signifies in history the European invasion of Australia which led to the death of many Aboriginal people. Aboriginal people apparently mourn on this day, as does most of Queensland (Rumour from an acquaintance has it). I’m not yet sure why Queensland had its own special mention in her rendition – is it mainly made up of Aboriginal groups? Or are Queensland residents sympathisers of the Aboriginal history?

And some Aussie folk believe that the celebrations should rather be held in September when Australia fought with Turkey… in Turkey… I’m also not sure why that proves Australian Day, but I guess, if you are going to change things to make everyone happy (except the Turks), then why not that moment.

Posted by Champagne Heathen at 05:20