Angles! Look for the angles!

was implemented up. I was attentive, ready, but instead of artistic focus, I found myself standing staring at this man's pink bits. Well, not so much pink by this stage and age, but more of a bruised grey.

"Right! Charcoal to it! Let's draw! ... Look for the angles students! Angles!"

"Angles?? Dear god man, you've offered me up a geriatric Cupid after the annual lard-tasting Fest and you're talking about angles? My buxom breast has more sharp edges than this poor naked sod!"

But dear Prof was having none of this. This was an original Olympian if ever there was an Ancient Greek on a mission to reincarnate. "Ignore the finer details, just focus on the skills! What I taught you about anatomy!"

Anatomy, yes. This, no! Where's my coy blushing episode!? My "oh I could never draw that" giggle giggle moment!? There are only 2 reasons we take Life Drawing; one is to draw, two is to return to embarassed mildly-horny school teenager. Where was my Brad Pitt in a robe, dammit!

The prof was blatantly ignoring my sulky teen angst. He rather grabbed my charcoal & began to craft.

And as I watched, slowly sketched insight descended onto my artistic disappointment. Clearly my dear teacher had not come across that Art School of Thought; Draw what you see, not what you think. But perhaps this was not such a bad thing....

Shadows got muscled out, greys became toned, belly buttons appeared with parallel lines radiating from them. I almost got turned on.

Here, on my papyritic page, appeared a man amongst men! A hero to jump out and take on my world. This six-pack of crumbling black smears pumped out of the page and had all of us weak at the knees!

Me! I need a hero to the end of the night! I nearly screamed from my easel!

To which the model belched, lolled over into his tattery poly robe, and said, "Right, who's up for some Micky D's!?" 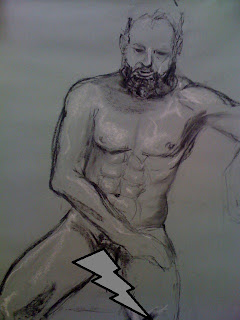 Posted by Champagne Heathen at 06:45

Decided yesterday that iScatterlings needs to make a comeback so will let you have advance warning if the website relaunch.

Are you still dancing on tables at Melbourne's watering holes

Rob?? Is that you through all the hazy years later!?

Mickey D's... Mikky D's... How does one spell the Two Golden Arches of cholestrol & obesity ruled over by a two-tone clown? MacDonalds, dear man!

Not enough table dancing sadly. Very sadly. I was doing some barstool dancing recently, which resulted the back of my head partnering with the floor ... I've lost my rhythm!

Sorry to hear the floor beat the crap out of your head. I reckon every dronk stool-dancer has one stool-dancing rhythmic glitch in them. You had yours now get back on the bottle and then onto the stools. Do it lickety-split. Do not wait for the champers to age!

I am fine and still living in a UK rural setting. No shop or post office in the village but have a well-known horse-racing stable behind the house which despite a growing but lowish success rate at the tracks around UK, still is able to produce huge B52 style blue-ass flies by the million during warmer than usual springs and the summers. Will need to invest in door and window screens.

The cats Temba and Shaka are still alive and well. Temba is loved by the stables. Its rat and mice population end up in a decapitated state on the house stairs or in the conservatory. Nice to arrive home after a day's slog to find a rodent torso and limbs scattered about. Baby wabbits are now on his menu too! And guess what the early warm weather here in UK is producing.......?!

Both cats are 14yrs old now. Shaka visits my 92yr old neighbour very regularly. I guess the treats he gets there are way too compelling. Nonetheless I reckon Shaka enjoys the company too. Old Joe looks forward to the cat's arrival.

Am so glad that love grabbed you and hoiked you over to Australia. Long may you two flourish and reap the happiness you richly deserve.

And now I know what Mickey D's is. Thanks. How utterly stupid of me. The last time I ventured into a Mickey D outlet was back in the '90's. Wow! Now I occasionally hit the Burger King at the services on the M4 when driving to South Wales for a weekend. It's a subjective matter of tastes innit?

Today is the big race on the UK winter/spring steeplechase calendar. In the office draw I pulled the favourite, “Synchronised”. Drawing the favourite (albeit in my case a horse named Synchronised,) may be advantageous to many but you can guess what is not at all synchronised - my bet and the horse winning! This does not auger well for me to grab the GBP20 office jackpot as my luck in all matters horse-racing is doomed at the tote window and always resorts in me swatting blue-arsed horse flies!

Take care you. Stay in touch.

Hello! Thanks for this message & all your news! I hope you are having the end of a great UK summer. I say 'great' in that relative term.

I am going to shut this blog down, I reckon. I really should've stopped when I said farewell that first time. And restarted somewhere else. Which means! I am considering restarting somewhere else. Where I feel I can type freely again. ...and of course, I would let you know if that happens!

Just take a few minutes to create a profile and get full access to our services. After signing up to luvfree.com dating site, you will receive a notification message with a link to your email address. Click at the link or enter a code to confirm your email. We need to make sure the email address you provided is valid. Once you get a new message or a kiss in your onsite inbox, you'll be notified by email. If you do not want to receive notifications, you can turn them off at any time. Once your email address is confirmed, your profile will be reviewed and approved. It usually takes us 1-12 hours. Unfortunately that is the only way to filter out the scammers.