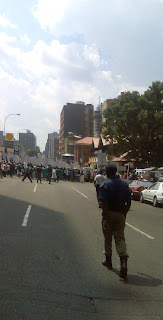 I think that my company has done the most dangerous thing. They have put the new girl into my corner of the office. And over the past month or so I have been learning that she is even more politically- and activist-minded than me.

And I’m loving this!

Bring on marches and emails and topics and intellectual debates. But in that way that both of us fire up our search for all perspective, start asking “Why this” “But then why that”, and finally round off with a “What are we going to do about it?”.

Uh oh, indeed. Most especially for all you apathetic folk on my mailing lists!

The even-newer Canadian colleague’s eyes were on terrified stalks as we begged & attempted to coerce her into joining us in yesterday’s lunchtime march. She pleaded fear – she is still dealing with the trauma of driving in the great Johannesburg region, please can she rather not yet deal with actually having to face Town, marches, and possible fist fights with brutal taxi men.

We eventually left her and the men at peace and three of us chickies RA RA RA’d our way out of the office in short skirts and, for me at least, high heels. 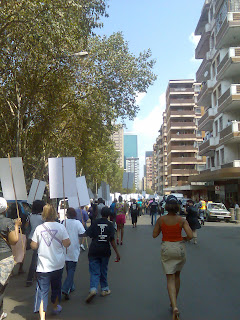 It was a good march. We felt solidaritied. The three of us managed to get the whole few-hundred-strong protesters shouting, “SIHLONIPHENI!!”….“We demand respect!” And do not think I am not grinningly proud of that!

Our march was cheered on by other women. We ignored the comments of “But these skirts aren’t short enough” from shopkeepers. We commended the men who joined in the march with us…most especially the heads of taxi associations. And I occasionally mockingly shook my fist at the taxi drivers who stood far above us on the taxi rank’s landings. 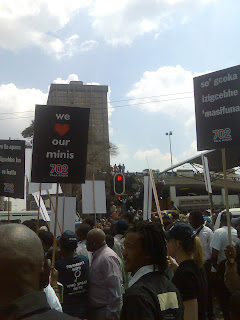 I got to say a few words into a BBC man’s microphone – something so random like being told women have had rights for centuries now, and yet such an incident can still take place... We waved at the cops as they filmed us (why were the cops filming us??). Some of the crowd tried to push into the taxi rank as most of the cops gently nudged them back, realising who would have to step in to break up very possible chaos.

Singing and marching, AMANDLAs and VIVAs. Sign shaking. And loving that so many of us were making a stand for the respect of women and our choices.

We are For Women! And we Roared!

My colleague realised we should have had Aretha blaring about R.E.S.P.E.C.T. And when the three of us drove back to the office, we at least had Shania Twain’s “Man, I feel like a woman!” blaring at the exhausted exhilarated crowd.

Q: Was it worth it? Will it make any difference?
[As so many cynics are asking. (While I just sigh at those comments of women stirring again)]. 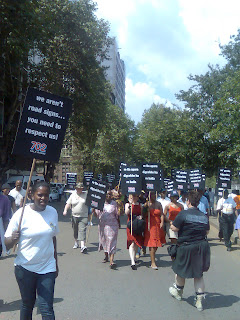 We showed the girls who have been sexually harassed at taxi ranks and/or because of what they have worn, that we are behind them, that what has happened to them, we believe, is wrong.
We showed that even if we cannot change it in a day, we will still shout back when the status quo is unacceptable.
We sparked thoughts in people’s mind – whether upfront or in the subconscious. And small thoughts tend to have an irritating habit of growing.

And best of all, rumour has it that the taxi drivers are going to have to attend Etiquette Classes!!

Posted by Champagne Heathen at 11:11

How about the taxi drivers cowering and half heartedly hurling abuse? Ha!!!

Ah, I'm so miffed at Jon. Making me all controversial and gossipy. How dare they let that leak through? Arrgg!

You Go Girl!!!
Looks so nice and warm back home.

I'm chuffed that the heads of taxi associations went on the march.

(Fist raised above my head): Power to all women! To speak and shout till the world listens.